I wanted to do something different than the Privateer look for my Hordes Earthborn Dire Troll. Since this particular troll can manifest into the elements that it touches I thought lava would make a great color   scheme.  I also sculpted and cast  a base out of resin but that will be another tutorial.
Color List of Reaper Master Series  Paints
White Primer
Lemon Yellow
Sunlight Yellow
Fireball Orange
Burning Orange
Blood Red
Blackened Brown
Black
Pure White 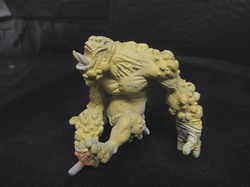 After priming the troll white I loaded up my air brush and sprayed most of the figure with Lemon Yellow.  This can be done without an airbrush but I recomend thinning the paint. 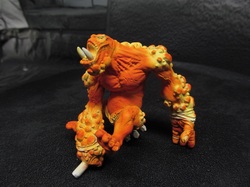 Using Fireball Orange I added some layers to the muscles and other areas that will be cooling off on the trolls body. My idea is to have the parts around the rocky bits of the body be the hottest and the tips of the rocks the lightest. 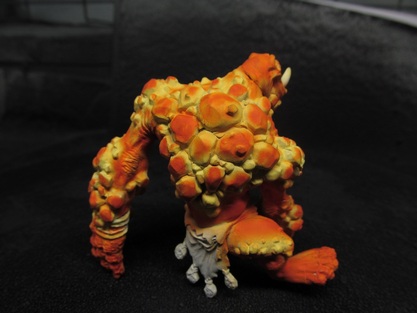 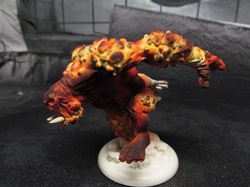 In this picture you can see I added some Blackened Brown. I did this to add some contrast and also for a base layer of the cooler parts. I've also added the homade base. 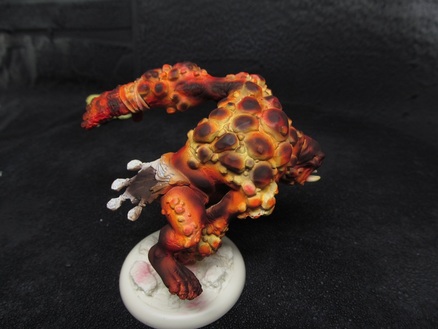 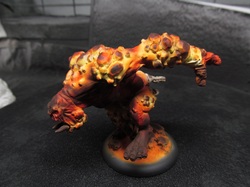 Going back over some areas where the contrasting colors meet I sprayed a thin layer of Burning Orange to help blend the colors together. I also started painting the base as well. 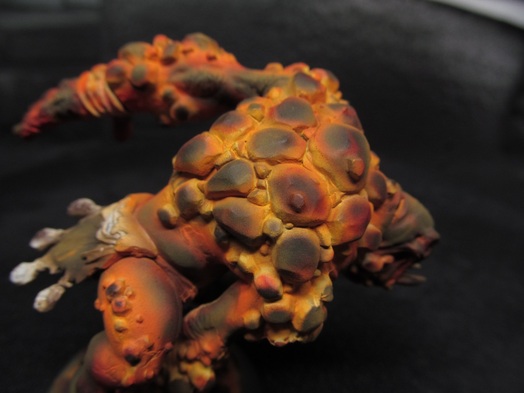 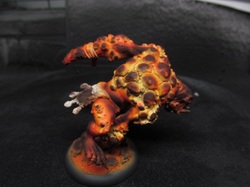 Now I started going back with brighter colors adding Sunlight Yellow around the edges of the rocks. 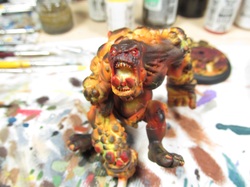 Here I've done some of the final details on the flesh. For the mouth I wanted a white hot throat so I layered the colors stopping at pure white in the center of the mouth. To farther the effect I painted the teeth Lemon Yellow and shaded with Sunlight Yellow and Blackened Brown until I had Blackened brwon in the center of each tooth. The tusks are going to be done the same way except the tops will be the cooler color.
At this stage I also went over some of the highest rock parts with a Blackened Brown and Black mix and the deepest crevices with Lemon Yellow and white mix to make some of the contrasts realy pop. 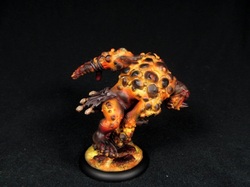 Here is a picture of the finished model. The last things I did was the cloth parts and skin cracks. For the cloth I used a mixture of Blackened Brown and gray, the skin cracks were done with Lemon Yellow.
Powered by